The Seine Is Rising Again

The Seine is currently (late December 2010) several feet above its normal level thanks to the unusual amount of snowfall that France, and all of Europe, has received this winter. As we approach the 101st anniversary of the great flood of 1910, some in Paris are wondering whether an enormous flood could overwhelm the city once again.

Here is an article from the English-language desk of France 24 which quotes me on the history of the 1910 flood and the possibilities for another event like it today.

Here are some photos of the current high water from Liberation. 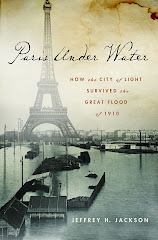